This Effingee, this Beast seems to always be where trouble and discord abound. In my painstaking search I have found evidence of him everywhere, in our city yes, but abroad and even across the globe.

Take notice at his manifestation at the scene of our most troubled incidents of late. 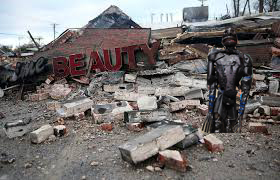 In the ruins of Ferguson Missouri... 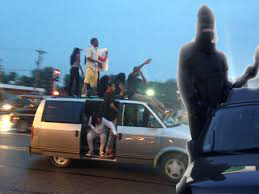 In the streets with hooligans. 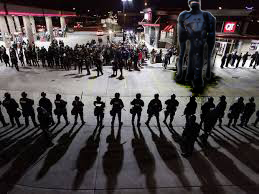 In the center of conflict. 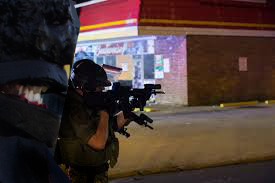 Our officers of the peace in danger from his jaws! 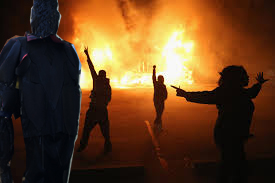 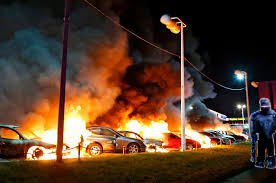 Right at home in this hellish night. 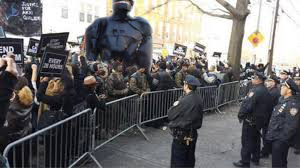 Once again emboldened by the crowd. 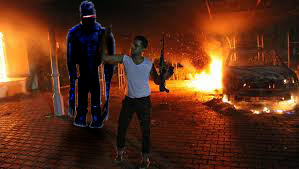 Evidence had him in Benghazi at that horrible time. 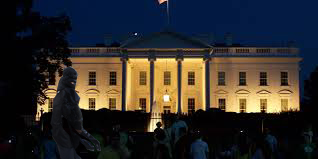 Can you see him?! At the seat of our government?! 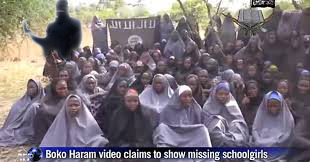 Someone saw him in Nigeria.

His time has come and he will be stopped! I swear it!!

No to set the trap and lay the bait.
Posted by Unknown at 2:42 PM No comments:

"Darkness falls on the city and the Beast is there. If I don't capture the fiend he will be entrenched in the catacombs of the neighborhoods. They seem to admire him like a long lost brother. It disturbs me. Maybe there is no saving them. 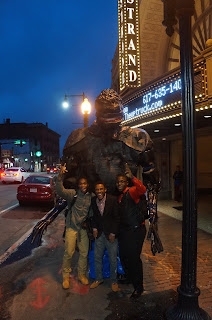 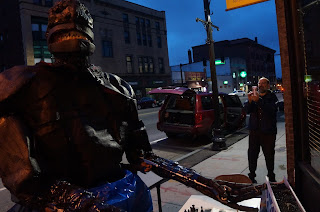 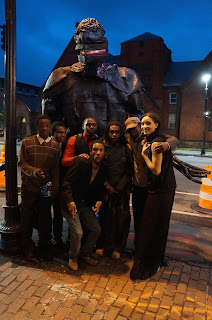 A few seem unimpressed by him. God bless the hardened true born Bostonian. 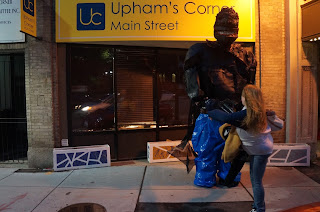 It appears she tries to kick him like a stray dog.
Good for her! 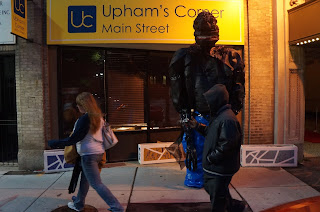 Her mate in tow she walks on.  He at least showed no kinship to the BEAST. There may be hope. 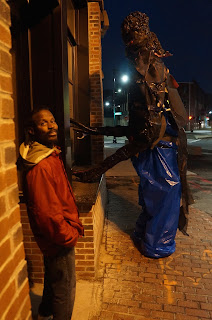 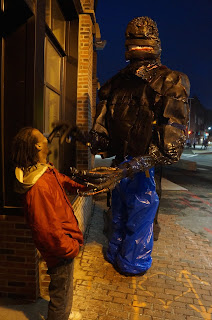 Seemed almost enchanted and in love. He saw the Beast as a reflection of himself and said as much!
What poor self esteem! 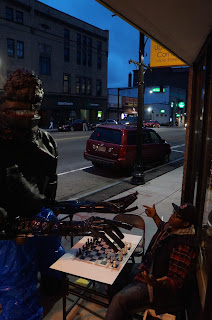 Am I to believe that this brute can master the finer points of chess?! Really?!! This absurd fascination with this monstrosity needs to end! Who is this man sitting down with the devilish fiend to match wits? It must be like talking to an eggplant with legs. 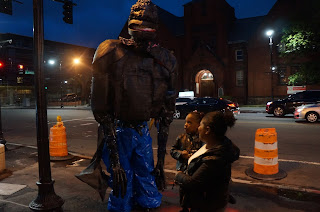 Again we see them tempting fate by bringing the children to see the wild creatures. Why are they not more afraid? What are they trying to look at more closely? How do they not see the danger before them?! HOW??!!

I must not only stop him, I must kill him.

I must not only kill him, I must pull him to pieces and show them his truth.

I must make him behave as the wild BEAST he is, this EFFINGEE."

"The BEAST called Effingee (the simple minded creature barely grasps language so he mangled the description "effigy" and took it as his name) has been a busy thing of late. He has been spotted in spurts all over the city and state. There are reports of his manifestation all across the country. He must have some arcane ability to bi-locate at the very least. He has been spotted in Missouri, in Florida, in New York. I rely on his predilection for the streets and neighborhoods of Boston for my pursuit.

Where he appears I scurry to find him. When I miss him by moments or seconds I collect data and artifacts from the scene. I warn the locals against embracing him and trusting him. One day they will be sorry they ignore the warnings.  What can I do but warn them? 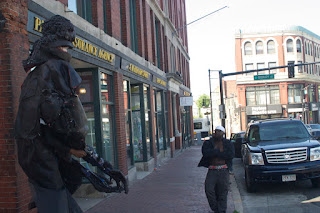 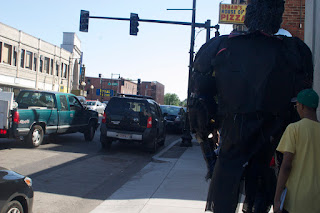 Here we see him in the Uphams Corner neighborhood cavorting with all manner of unsuspecting folk. It should be of no surprise that he first encounters an indigent youth (seen with a white head covering and glasses) who takes him to be a long lost friend. The young man, worn beyond his actual years through hard living and poor choices, offers the BEAST a smoke. He asked him for money. He paraded him along as if he were the handler of this giant thug. The BEAST Effingee haplessly sang songs and beatboxes with the sluggard as if old friends. This would seem his natural company. 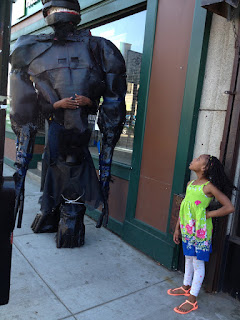 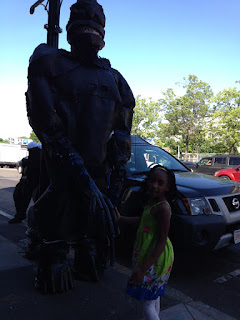 I fear most the little children who of no fault of their own approach the BEAST with open arms and true friendship. How close they are to sudden danger! How easily he could snatch them up and do who knows what!!! Playing patty-cake does not make him any less the threat.
He draws an unwitting crowd like a celebrity! I was just a step too slow this time. 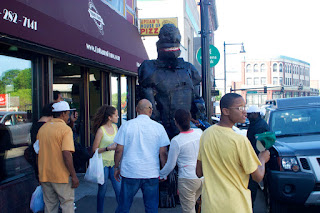 This is the best photograph available of the monster up close to date. Note the characteristics that distinguish his baser traits; 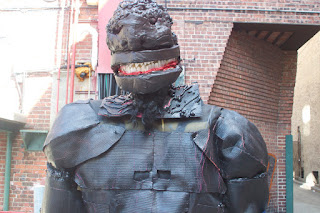 The small cranium- Evidence of a tiny brain incapable of complex human thought.
The small wide-spread eyes- Evidence of limited but specialized predatory vision. Deeply set in his head to protect them from impact in struggle.
The wide nose- Meant for inhaling and maximizing oxygen while pursuing prey or in combat.
The wide lascivious mouth- Need I explain? Large fleshy lips for sucking moisture, ragged broken teeth for tearing flesh and bones and gristle, powerful jaws that could snap light poles in half.
Sinewy muscles and not a scrap of body fat. He obviously comes from a place that tests its inhabitants at every turn. He is no doubt hardened to survive, and to breed. 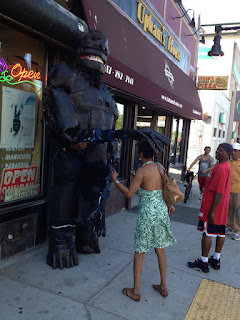 Here this unsuspecting soul, clearly out of her intoxicated mind flirts and cavorts with the BEAST unaware of what she might be stirring in him. No creature this raw and lean is immune to the immutable laws of the wild; kill, eat and mate.
This woman is in clear danger and carries on as if this black thing is just some young stud. I must find him and contain him for the good of civilized society. 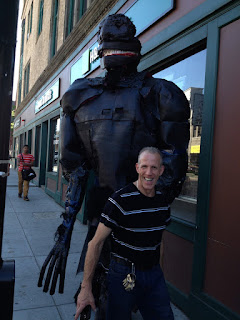 What should happen if he were to escape past the boundaries of the neighborhoods where these hardened folks from the rough places of the world; Carribean ghettos, African war zones, embattled places in Asia or Ireland or Poland? They see him and laugh and walk past him or play with him humoring him. Perhaps their trauma has dulled their fear. 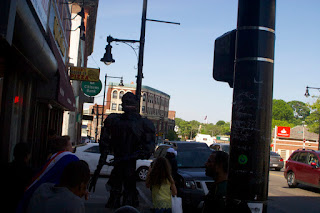 Our city is fortunate he has not consumed half of it as yet. I must capture him before he ventures further."
-6/1/2015